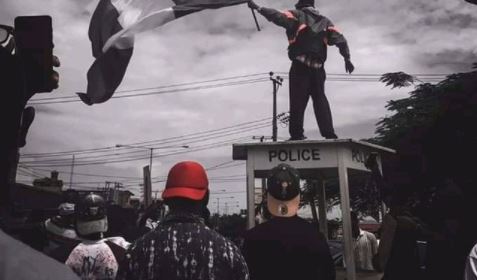 Jameela News reports that a group of alleged hoodlums have freed prisoners in Benin city, Edo state, under the guise of the #EndSARS protest.

The Edo State Government led by Godwin Obaseki disclosed this through a statement released by his Special Adviser Crusoe Osagie on Monday, October 19.

“The hoodlums are currently exchanging fire with the security personnel at the Maximum security prison in Oko, Benin City,” he said.

Jameela News obtained from reports on Newsone Nigeria that the hoodlums were captured breaking into the Medium Security Prison in Sapele road, Benin city and releasing some prisoners.

This online news medium gathered that the suspected hoodlums also burnt down the police stations.

List of affected stations are; Ugbekun and Idogbo Police Stations in Ikpoba Okha Local Government Area of the state.

“They came in their thousands and their mission was to free inmates. They have been communicating with the inmates because even before they broke into the facility, the inmates were already rioting inside the place,” a prison warder told Punch.

Just In: Prisoners break out of Sapele prison in Benin!! Rt this aggressively for awareness!!#EndSARS #SideWithNigeria pic.twitter.com/OuKuNVffUK

BREAKING: Prisoners are escaping from the prison along Sapele road, Benin city.#EndSARS pic.twitter.com/rIBpjMJHcy