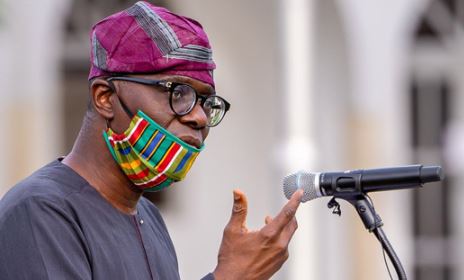 Lagos State Governor, Babajide Sanwo-Olu, has declared a 24-hour curfew to curb the activities of hoodlums acting under the guise of #EndSARS, Jameela News understands.

Jameela News reports that hoodlums in Orile area of Lagos State have hijacked the #EndSARS protest and burnt down a police station.

Reacting to the recent mayhem happening in the state, the Lagos State Governor has placed a 24-hour curfew on the state, effective from 4 pm Tuesday, October 20.

Governor Sanwo-Olu made this known in a statement.

His words: “I have watched with shock how what began as a peaceful #EndSARS protest has degenerated into a monster that is threatening the well-being of our society. Lives and limbs have been lost as criminals and miscreants are now hiding under the umbrella of these protests to unleash mayhem on our state.

“As a government that is alive to its responsibility and has shown a commitment to the movement #ENDSARS, we will not watch and allow anarchy in our dear state.

“I, therefore, hereby impose a 24-hour curfew on all parts of the State as from 4 pm today, 20th October 2020. Nobody, except essential service providers and first responders, must be found on the streets.”

The #EndSARS protest which commenced on October 8, 2020, was a protest aimed at correcting police brutality and extra-judicial killings in Nigeria.

However, on Monday, October 19, Jameela News reported that hoodlums hijacked the protest and freed some prisoners in Benin city, the capital of Edo State.

This led to the ban of the protest in Edo State, a few hours after he announced a 24-hour curfew.

Meanwhile, the 12-day long protest has been without violence with other states joining to support the demand for a total overhaul of the police sector in the country.