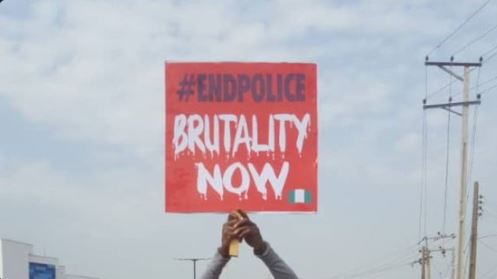 One family of an #EndSARS victim has confirmed the killing of their son by the disbanded Special Anti-Robbery Squad (SARS), Jameela News reports.

The family represented by the mother of the deceased, Victoria Agori demanded the prosecution of the police officers involved in the killing of her son.

Victoria Agori told the court that her son, Daniel Agori was murdered in her presence “like a chicken” by the police officers who claimed he was a cultist and a kidnapper.

The bereaved mother of the deceased further demanded the release of the body of her son for his burial.

She said: “Justine Adaka gave the order to kill my son and my son was killed right in my presence.

“Daniel Agori did not make any statement before they killed him like a chicken.

“These policemen are bad people. They called me the mother of a kidnapper and cultist but my son was neither a kidnapper nor a cultist.

“He was a footballer and hairstylist. He was to travel to Spain.”

When the respondent’s counsel queried Agori about the number of panels she has informed about her case, the court learned that the court was the only place she had taken her case to.

She, however, revealed that the Federation of International Women Lawyers and some other human rights activists had been helpful.

This online news medium learned from Vanguard that the bereaved mother was forced to leave Portharcourt after she received numerous telephone calls threatening her to drop the case.

Agori said that the police had been investigating the case for over a year with no progressive result.

Meanwhile, the Counsel to the petitioner, Abiodun Olutekunbi, told the panel that her two sons David and late Daniel and Daniel’s fiance, Silver Ogbonna, were arrested and taken to the Police Command Unit at Aluu in Ikwerre, Rivers on Monday 10, 2019.

Olutekunbi claimed that after a brief chat with the SP. Justine Adaka and DSP. Yusuf Bello, in his presence, the police officers were ordered to kill Daniel immediately.

How Daniel was killed

The Counsel revealed that Daniel was separated from the other prisoners, blindfolded with a shirt and shot to death in the head.

The panel also heard that the mother of the deceased was bleeding through her private part as a result of the gun nozzle used by the policeman to assault her.

When the National Human Rights Commission panel asked the Counsel what he wants for his client, the Counsel said: “We want the panel to order the prosecution of SP. Justine Adaka, DSP. Yusuf Bello and Musa before a court of competent jurisdiction.

“We also seek the order of the panel for the immediate release of the corpse of Daniel Agori for proper burial.

“We further pray for the order of the panel for compensation of one billion nairas.”

The matter was adjourned by the Chairman, Justice Suleiman Galadama, till January 26, 2021.