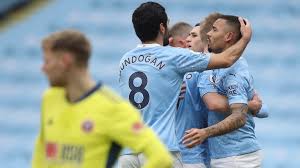 The Premier League had all the taste for glory and it did serve up some fantastic permutations ahead of Tuesday.

Some important matches didn’t live up to billings but others came to the rescue of soccer-loving fans.

It wasn’t expected to be an easy night for the blades from home but every manager, including Pep Guardiola, agrees to them being a surprising side despite being at the bottom of the table. Why? Most of their losses are by a single goal difference.

A beautifully crafted pass from Ferran Torres teed up Gabriel Jesus for his third league goal of the campaign. Afterwards, it was all Man City in possession. The win extends Guardiola’s team lead to three points with a game in hand. With 12 wins on a row, it will be difficult to stop Man City for their third premier league title in four years.

It was predicted that anything aside a loss for the Hammers must be a well-deserved result (considering both the team’s history against Liverpool and the manager’s).

Jurgen Klopp put out a side that looks “makeshift”, with Shaqiri, Origi, Milner and Nat Philips all getting starting roles. Magic didn’t occur at either goalpost until the second half when Curtis Jones came in for Veteran Milner.

It took only 34 seconds before a curled pass from the substitute found Mo Salah, to score his 20th goal of the season. Another came from him and Wijnaldum scoring the third.

The result puts Liverpool on third, four points behind the leaders. They may still have Captain Henderson playing centre back, but they have surely found their scoring boots.

Not to sound so critical of the other team, I’ve never seen a completely one-sided game of football this season so evident than this.

Burnley came unprepared for football on their visit to Stamford Bridge.

Captain Azpilicueta sprint from one end of the pitch to score at the other shows what determination is all about. And Marcos Alonso, who was the third choice during Frank Lampard, scored a Striker’s goal, with fantastic control and lash to the top of the net.

The victory put the Blues in 7th place. The question is, how can they keep the momentum? Keep playing Odoi? Who knows…

The match may have not lived up to its hype but criticism from legends like Paul Scholes and Tony Adams did sum up the current state of both teams.

Lack of hunger from both sides epitomizes how terrible it was.

Cavani’s misses was the main talk of the game while Bruno Fernandes walk of the pitch was the side talk.

For the Gunners, a tap on the shoulder is worth it. With Saka and Aubameyang absent, there is little they could offer going forward.

Not conceding a goal is a testament to how improved they’ve become.

The Foxes ate up their opponents in the first leg (4-1) and were on their way there with Harvey Barnes opening the scoring. But Marcel Bielsa got the better of the team with three goals from Dallas, Patrick Bamford and Harrison.

The results mean Leicester city missed their chance to go up to 2nd in the league. No Vardy, No Ndidi, No Leicester?

Kane and Son are the best duos for attack this season, but with both ankles injure for the English talisman, there is little the Spurs could do to avoid a second defeat in four days.

The solitary strike coming from Trossard decided the game, where the Seagulls should have had more goals, then there was Toby, twice!!

6th position in the table means Jose Mourinho’s men need to shorten the six points preventing them from getting into the top four.