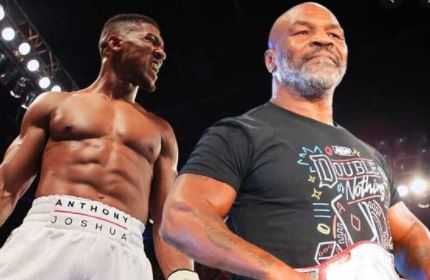 Jameela News reports that heavyweight boxing champion Mike Tyson has revealed who he fears more in the upcoming Fury vs Joshua fight.

Mike Tyson who is a huge fan of British-Nigerian heavyweight boxer Anthony Joshua kept it “honest” as he declared Joshua “might be in trouble” in the heavyweight bout against fellow Brits Tyson Fury.

As the date for the fight pulls closer, Tyson has said that Fury has more speed than Joshua and that may be used to his advantage in the British duet.

Speaking during an interview with Haute Living, the retired heavyweight boxer said that Fury’s shocking performance against Deontay Wilder gives him an edge over Anthony Joshua.

His words, “Listen, you know I love f***ing Joshua.

“But I really think this Tyson’s too elusive, he’s not gonna hit him.

“Listen, keeping it honest, I like Joshua a lot. Maybe he punches harder than Wilder, but he doesn’t punch faster than Wilder.

“If he doesn’t punch faster than Wilder, he’s not gonna f***ing touch this guy.

“That’s just what I think, he punches hard, but he doesn’t punch fast.

“If Tyson Fury can get away from Wilder’s fast punches, Joshua might be in trouble.”

Although the date and venue for the fight have not been confirmed, English sports promoter, Eddie Hearn, claimed that both Joshua and Fury have now signed contracts, suggesting that the venue and the date for the fight would be conveyed soon.