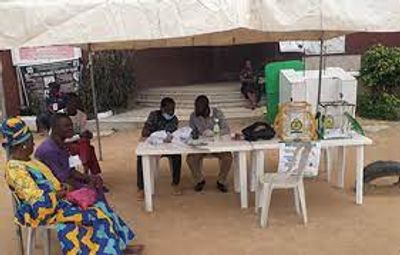 There was a low turnout of voters on Saturday for the Local Government election in Lagos.

Jameela News reports that many polling units such as Badagry, Alimosho, and other Local Government Councils had just a few persons voting.

At the Awhajigoh Ward C in Badagry local government, electoral officers arrived at 8. 20 a.m, Jameela News gathered that the low turnout was due to the voter apathy in the Badagry Area.

Also, at Polling Unit 038A, Baruwa Road, Ward 07, Ipaja North in Alimosho Local Government, the election commenced at about 9.30 a.m.

The officials of the Lagos State Independent Electoral Commission (LASIEC) arrived at the center around 8.30 a.m, while election materials were delivered at about 9.05 a.m.

Baruwa, the APC agent at this center explained that voters had started casting their votes but the card readers were have been functioning well.

“The card reader has not been working since the election started, so the LASEIC officials have resorted to using the voters’ list to verify with the information on the voter card so that voters can vote,” he said.

“The turnout is poor and less impressive but since the election has just started, we are hopeful that the situation will improve before the end of the election,” he said.

On the other hand, PDP Party Agent at the ward, Mrs. Arike Oni, said although the election had started, she could not give an account of the process because she just came.

Although a voter, Mrs. Folake Bewaji, lauded the process of the election describing it as smooth and peaceful.

She also said since the election had started, one should not conclude that the turnout is low until the end of the election.

“The election has just started, maybe people thought that there will be a crowd, so they are taking their time.

“Likewise, I also thought that there will be a crowd, so I stayed back until I saw people who left to vote, coming back almost immediately, so I decided to come and cast my vote.

“This situation is normal when it comes to elections, she said.

There were security operatives such as the Mobile Police, Civil Defence Corps officials, on major roads, to prevent the breakdown of law and order and carry out the restriction order of the state government.