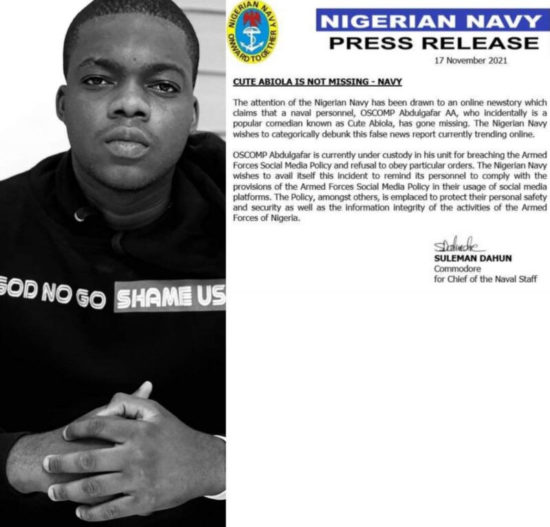 The Nigerian Navy has cleared the air and said Abdulgafar Ahmad Oluwatoyin, popularly known as Cute Abiola has been arrested, contrary to the news making rounds that he is missing.

Jameela News reports that The Naval Head of Information and Public Relations Directorate, Navy Commodore Suleman Dahun, confirmed to The PUNCH that the comedian was in detention.

Dahun, stated that the comedian was being detained for breaching the Armed Forces Social Media Policy.

He said, “Abdulgafar is not missing but he is in detention. About two weeks ago, we had evidence that he was exhibiting himself on social media, contrary to the Armed Forces Social Media Policy. He was on leave, so we called him back to come and explain why he was breaching the Armed Forces Social Media Policy. He refused to come back, which itself is an offence.

“We can call anyone on leave back. We need to know why he was exhibiting himself in a manner that is contrary to the provision of the Armed Forces Social Media Policy. He refused to come back. So, when he came back, we put him into custody. He is in detention he is not missing.”

His colleague in the comedy industry, Mr Macaroni, had raised the alarm that Cute Abiola might be missing. He said he went missing after reporting at his office in Navy Town, Lagos on Monday, November 15, 2021.

A screenshot of a WhatsApp message shared by Mr Macaroni on his verified Twitter page read, “Ahmed Gafar is popularly known as The Cute Abiola; left his house for office at Navy Town at 06:00 Am on the 15th November 2021 and got to the office at about 07:00 am or thereafter. While he got to the office, he called his wife and associates that he had gotten to the office.

“Subsequently, his wife and other associates have made several attempts to contact him but to no avail. Since he last communicated with his wife and associates that he already got to the office, he has not returned to his family and no one has heard from him till this moment.

“It was subsequently gathered from a reliable source that he has been locked up in the Nigerian Navy cell since he got to the office yesterday morning till the time of posting this information without being fed and no date has been stated for his release from custody.

“The most frustrating part is that nobody is talking anything as to the offence he has committed, but that he’s been detained on an order from the Nigerian Navy Headquarters.

“This unfortunate situation has rendered his wife emotionally tortured and traumatised as the Cute Abiola is an Ulcer patient. Hence, not feeding an Ulcer patient as punishment for an undisclosed offence is something to be worried about with the view to avoiding unnecessary circumstance with regards to the health of The Cute Abiola.” 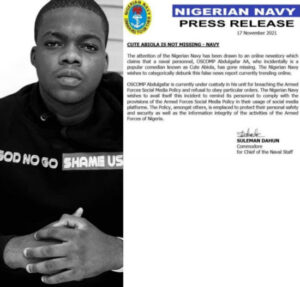