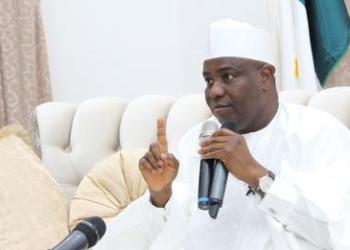 The death toll in the bandits attack in two local government areas in Sokoto State has risen to 43.

Jameela News reports that this is according to the State Governor, Aminu Tambuwal who visited Illela, one of the areas affected by the attack.

Tambuwal On Attack On Sokoto

Three days after, Governor Tambuwal led members of the State Executive Council and security chiefs, as well as other top government officials on a condolence visit to the people on Wednesday.

Earlier, Tambuwal had confirmed the attack by suspected marauders on some villages, saying 15 people were killed at the first instance. However, at the time of the governor’s visit, the toll has risen to 43.

It was gathered that a District Head in one of the five villages attacked during the midnight raid was wounded.

While condoling with the people, Tambuwal described the attack as unfortunate, upsetting and disheartening.

He commended the local government authorities, monarchs and community leaders for their lawful composition of a volunteer group working in tandem with the security operatives in the area.

He said the Sokoto state government will not support the constitution of illegitimate vigilante groups working in disagreement with the joint operations of legitimately constituted volunteers, who work closely with and under the supervision of security agencies.

He appealed to the people of the area not to be discouraged by the recent attack, but to be motivated and redouble their efforts, without seeking revenge, in securing their communities.

The governor equally assured them of sustained government assistance whenever required while praying for the repose of the souls of the deceased.