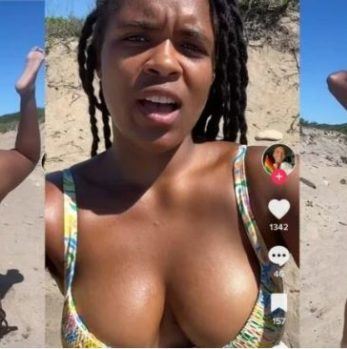 Watch the video of the US Senator twerking upside down.

This online news platform understands that the 28-year-old Tiara Mack, who entered the Rhode Island legislature in January 2021 and was the first openly LGBTQ black person elected to the senate, posted the video of herself on a beach in a bikini, doing a headstand and twerking upside down on Monday, July 4, 2022.

‘Vote Senator Mack!’ she said at the end of the eight-second clip – which has attracted over 4,000 likes in the first 24 hours
Later on Monday, she tweeted: ‘Damn. Twerking upside down really makes the conservative, unhinged internet accounts pop off on a Monday’
Mack then on TikTok addressed her critics, noting that she has an Ivy League degree and her constituents like her because she is ‘fun’

Damn. Twerking upside down really makes the conservative, unhinged internet accounts pop off on a Monday 🥴

Jameela News reports that the US Senator twerking video has now been viewed thousands of times and thousands of comments have been posted — some voicing support, others critical.

When one person commented that she ‘set the race back years with this’, Mack replied: ‘This is tacky. This is lazy. What? No, baby girl – this ain’t it.’

Another person commented: ‘I don’t ever wanna hear you complain about how ‘women aren’t respected in this country’ after posting this.’

One critic referred to her as a U.S. senator.

‘Do y’all really be coming on the internet without knowing how to do a simple Google search?,’ she asked.

And some were supportive.

‘Public figures are also real people. If she wants to twerk, let her twerk,’ said one.

‘Be more concerned about her stance on public policy issues, not her dance moves. Remove the stick out of your butt!’

Another added: ‘So because we are public figures we can’t have fun? That’s what I’m understanding you saying.’

Another said: ‘Why they hating, that’s crazy. What’s so offensive about twerking. I’m really curious. If you can do ur job, then you can do your job lol.

‘Why does it matter if you twerk in your own free time?’

See the video of US Senator twerking upside down below…