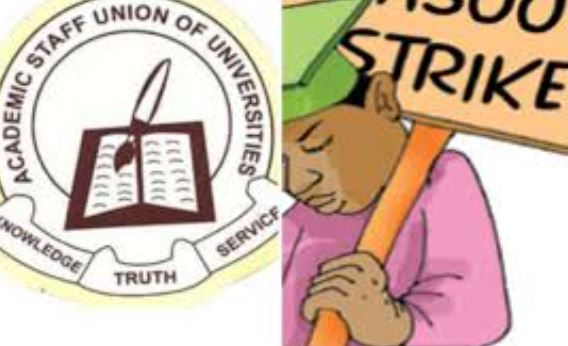 Latest ASUU News On Resumption and ASUU Strike Update Today, 8 July 2022 can be accessed below.

Jameela News has compiled the latest ASUU news on the current strike embarked by the Academic Staff Union of Universities (ASUU), a Nigerian union of university academic staff.

Jameela News reports that since Femi Otedola endorsed Bola Ahmed Tinubu, most netizens who have been singing his praises are alleging the billionaire benefits from Nigeria that has not been working.

A tweep, FS Yusuf, @FS_Yusuf_, stated, “DJ Cuppy is in Oxford University, you are in Yaba Tech. ASUU strike can never affect her but ASUU strike can halt your destiny. Otedola has the right to endorse a candidate and u have the right to reject it. Think twice. Suffer no be life.”

The Academic Staff Union of Universities (ASUU) has maintained that they have not received any official invitation from the Federal Government for the earlier announced meeting with the government team aimed at resolving the areas of disagreements and calling off the strike.

ASUU To Call Off Strike Next Week – Education Minister
Minister of Education, Prof. Adamu Adamu, has stated that the ongoing industrial action embarked upon by members of the Academic Staff Union of Universities (ASUU) will be called off within the next one week.

ASUU Strike Update: Negotiation Committee Waiting For FG To Suspend Strike
Academic Staff Union of Universities and the Joint Action Committee of the Senior Staff Association of Nigerian Universities, and the Non-Academic Staff Union of Educational and allied institutions have both said they have yet to receive any message after discussing the 2009 agreements with the Federal Government renegotiation committee.

ASUU Gives Positive Update, Says Talks With FG Progressing Smoothly
The Academic Staff Union of Universities (ASUU) has revealed that the renegotiation of the 2009 ASUU-Federal Government agreement which has been a major bone of contention in its dispute with the government is progressing smoothly and has reached an advanced stage.

The lecturers union said that the University Transparency and Accountability Solution (UTAS), which the government has refused to accept, has been tested for the third time by the National Information Technology Development Agency (NITDA) and would start testing the Integrated Payroll and Personnel Informati on System (IPPIS) by next week.

This disclosure is part of the statement issued by the ASUU President, Professor Emmanuel Osodeke, and can be seen on the union’s website.

ASUU Issue Not As Simple As It Seems – Lai Mohammed

Federal Government has given indications that the lingering tussle between it and the Academic Staff Union of Universities (ASUU) is complex.

The Minister of Information and Culture, Lai Mohammed, said this on Wednesday after the Federal Executive Council (FEC) meeting chaired by President Muhammadu Buhari.

He said that in spite of the complexities, a lot is being done behind the scene to resolve the issues.

The minister argued that the Federal Government is concerned about the protracted issues with the lecturers and will continue to work to find an early resolution to the problem.

Federal Government has continued its negotiations with the Academic Staff Union of Universities (ASUU) as the strike by the lecturers enters its fourth month.

A meeting between the striking lecturers and the Professor Nimi Briggs Committee, however, ended without a concrete agreement as members planned to reconvene within 24 hours to consider a draft agreement.

Some students of Nigerian public universities have expressed frustration over the lingering strike by the Academic Staff Union of Universities(ASUU).

Some of the students in an interview with the News Agency of Nigeria (NAN) in Port Harcourt on Friday appealed to Federal Government to meet at least 50 per cent of ASUU demands to end the strike.

Joint Admissions and Matriculation Board (JAMB) has knocked the President of the Academic Staff Union of Universities (ASUU), Prof. Emmanuel Osodeke, over a statement credited to the latter on the issue of admission into higher education institutions in the country.

Prof. Ishaq Oloyede-led JAMB, in a statement, said contrary to the erroneous belief of the ASUU President, the JAMB does not conduct admission for institutions but rather regulates the process.

The meetings, Jameela News understands, are geared towards resolving the ongoing strike by the various unions.

Prof. Nimi Briggs-led committee set up by the Federal Government to renegotiate the 2009 Agreement signed by the government with the Academic Staff Union of Universities, ASUU, and put an end to the ongoing industrial action by the union has failed to meet the three-month time frame given it by the FG to conclude its assignment.

The committee, which was inaugurated by the Minister of Education, Malam Adamu Adamu, on March 7 this year, was given three months to conclude its assignment.

Therefore, the committee is expected to continue the negotiation with the union later this week after the public holiday.

The Academic Staff Union of Universities (ASUU) has said the University Transparency and Accountability Solution (UTAS) is undergoing another round of tests by the National Information Technology Development Agency (NITDA).

The President of ASUU, Prof. Emmanuel Osodeke gave the update on a Human Right Radio in Abuja yesterday, clarifying several issues surrounding the ongoing strike and why the strike has lingered.

This is the third test being carried out on the UTAS accounting software by the government agency.

Osodeke said UTAS passed over 90 per cent in the first and second tests carried out on it, but that NITDA concluded that the payment platform failed some tests.

ASUU Chairman at the University of Ibadan, Professor Ayoola Akinwole, who stated this in his June 12 statement said the high price of the presidential forms of the two major political parties is a strategy adopted by politicians to ensure looting continues in the country.

Professor Ayoola said no Nigerian professor can be able to purchase the presidential form of the ruling All Progressive Congress, APC, or the opposition Peoples Democratic Party, PDP, without saving for 40 years to 100 years.

Professor Ayoola said it was time Nigerians and youth took over the affairs of the country from the corrupt politicians who have no plan for the country.

ASUU Disassociates Itself From An Intervention Fund, Rejects N50m Donation

ASUU has disassociated itself from an Intervention Fund while rejecting an N50m donation.

Jameela News reports that the leadership of the Academic Staff Union of Universities (ASUU) has rejected the sum of N50 million that was donated as part of an intervention fund.

Ahmed Isah popularly called the “ordinary President ” of the berekete family radio station invited the union’s president, prof. Emmanuel Osodeke and his team on Saturday, June 11, to the radio program where the intervention fund idea was formally presented.

ASUU disassociates itself from an intervention fund, rejects N50m donation
ASUU
In his effort to make the union buy into the intervention fund idea, he disclosed that the Akwa Ibom state governor, Udom Emmanuel has donated N50 million to the course.

After presenting the money, ASUU’s president who wasn’t pleased with the development said the union shouldn’t be associated with such.

Angered by the union’s response, Ahmed fired back at ASUU and threatened to stop the intervention. Listeners who called in during the show described ASUU’s response as rude and insensitive.

This comes after the radio host had on June 1st, called on well-meaning Nigerians and presidential aspirants in the forthcoming general elections to contribute the same amount they had used in purchasing their nomination forms in view of settling ASUU’s demands and ending the strike.

Ahmed had also revealed that he has contributed N10 million of his personal money to the course.

This page will provide ASUU Strike update on a regular basis. We hope to cover so many news and talking points about the ongoing ASUU strike. The Academic Staff Union of Universities has further declared another one month of strike since the outcome of the last meeting with the Federal Government did not end well.

We really do hope ASUU calls of this strike because Nigerian Students studying in Federal Universities are really not happy with it. They are always reading ASUU Strike News almost every day to know what is the fate of their academic pursuits.

But as we do our part by providing you with ASUU Strike News Updates, do your own part by studying and also learning other skills outside of the four walls of a classroom.

From credible news sources, ASUU is willing to suspend the strike as long as the Federal Government begins to fulfil their demands. However, ASUU news for today June 2022, has it that ASUU Strike has not yet been called off.

When Will ASUU Call Off Strike

When ASUU will call off strike is on July 2022. The current extension of the strike means that the next time they will enter a meeting with FG will be next month.

But you should always do your best to stay updated on the Latest ASUU Strike news so that on daily basis you won’t miss out on important updates. We usually published a lot of news reports about ASUU Negotiations with the Federal Government so ensure you bookmark this page so you can get steady news.

In Latest news about ASUU Strike today, the Academic Staff Union of Universities (ASUU) has decided to continue with the strike until the come to an agreement with the Federal Government.

So that is it for today, if you want to always remain abreast with all the news on ASUU, then do well to check back daily because we will be publishing fresh updates on this page.

To continuously receive ASUU Strike News Update today, leave your opinion below and also tell us what you want ASUU to do regarding the strike in order to enable students go back to school.