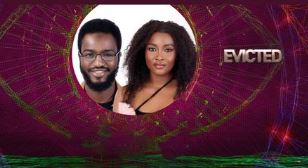 Jameela News reports that Illebaye and Khalid have been evicted from the Big Brother Naija Season 7 house.

Illebaye who scored the least votes was evicted before Khalid who polled a little more than her’s.

Meanwhile, this online news learned that Illebaye was turned down by Kess when she attempted to kiss him earlier in the day.

Kess who is the only married man in the show reminded Illebaye of his marital status before turning her down.

Also, Khalid, who was evicted during the live show on Sunday, told Ebuka that his relationship with Daniella is serious.

He said although he didn’t plan on having a relationship in the show, it happened fast.

“It was quick, I knew I said I didn’t want a relationship but it hit me like a bus. It is serious.”

When asked how he felt about his eviction he said, “It’s a lot of emotion right now. I’m just grateful.”

Daniella and Khalid had been criticized for ‘making love’ in the house.

Both ‘Level up’ housemates were seen ‘making love’ under the duvet last Sunday night.

The videos showing their act have since gone viral and stirred reactions online.